Although it's often assumed that you can't be ticketed for driving under the speed limit, you may be charged with reckless driving if an officer believes you are going too fast for highway and traffic conditions. 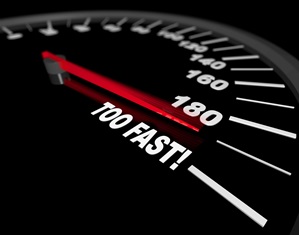 Driving Too Fast for Highway and Traffic Conditions

Section § 46.2-861 of the Virginia code reads, "A person shall be guilty of reckless driving who exceeds a reasonable speed under the circumstances and traffic conditions existing at the time, regardless of any posted speed limit."

Under § 46.2-861, you can be charged with reckless driving if an officer believes you are driving too fast to be safe, even if you haven't exceeded the speed limit. This includes, but is not limited to, driving too fast:

Consequences of a Reckless Driving Conviction

Reckless driving is much more serious than a simple traffic ticket. Typically, it is considered a Class 1 misdemeanor criminal offense. If convicted, you'll face:

You'll also be left with the stigma of a criminal record, which can cause problems if you need to pass a pre-employment background check, apply to grad school, rent an apartment, enlist in the military, or maintain an active security clearance.

Protect Yourself by Building an Aggressive Defense

If you've been charged with reckless driving under § 46.2-861, paying your ticket and accepting the consequences of a conviction would be a mistake. Since this section of Virginia reckless driving code involves a great deal of officer discretion, an experienced attorney can help you prepare an aggressive defense centered on the belief that you were not driving in an unsafe manner. Call today to schedule a free, no obligation case review with Virginia reckless driving lawyer Charles V. Hardenbergh.