How a Calibration Certificate Can Help Win Your Reckless Driving Case

When my client has a lot on the line, a calibration certificate is often the only way to convince a judge not to impose an active jail sentence.  Many people are shocked to find out that speeding will get them locked up in Virginia, but at speeds over 80 MPH, that’s exactly what the law allows. Many lawyers suggest to their clients getting a calibration certificate, but few of them ever explain the psychology behind this critical evidence in mitigation.  Once you understand why it is so critical, the value of the calibration will be clear.

Why Calibration Makes Such A Huge Difference

First, let’s start with the thought process which is going through the judge’s mind during your trial.  Many people stress over details such as what to wear, or how they should plead.  But the judge pays little attention to such things.  To him, you are just one of countless thousands of defendants that have been caught speeding.  The judge knows you are hoping for a break like all the others, and he is quite accustomed to hearing excuses.  Ignoring them and finding most of the people guilty is part of the judge’s job.  But a calibration certificate can change all that…

The Judge’s Job: To Be Fair

The judge needs to be fair and impartial.  They need to treat everybody the same.  In order to do that, every judge in Virginia needs to have a very important number in his head on the start of his first day on the bench.  That’s the lockup speed.  Some judges will lock people up below 90 MPH, but that is one speed that many judges use as their “rule of thumb”.  If you are at 89 MPH you walk out of their courts, but if you are at 90, you are placed in handcuffs and/or shackles and bound over to the custody of the Sheriff to be transported to jail.  However…

Only The Calibration Certificate Can Do This:

There is only one way that exists to get another number into the judge’s head besides the speed at which you were clocked.  If you were caught doing 92 MPH, but the calibration certificate gives you 3 miles, that is 89 MPH in the judge’s mind instead of 92.  You see, if three people whose cases are heard before yours were also driving 92 MPH, and they are all given two days in jail, it would be hard for the judge to justify giving you a sentence that did NOT include two days in jail.  In order to appear fair, the judge must treat everyone the same.

What Makes It So Powerful? 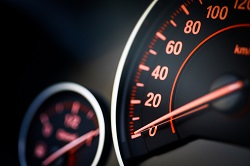 First, let’s examine what it is.  A calibration is a test of speedometer accuracy.  Most people aren't aware that at higher speeds, most speedometers are off by 1-3 miles per hour right from the factory.  There are a few ways that a speedometer can be calibrated, but one of the simplest ways is using a GPS enabled smartphone with a speedometer app.  While traveling down the highway or on a closed course, a passenger can observe the true speed at which you are traveling and then record the speed displayed by the speedometer.  If you are traveling at 92 MPH but the speedometer only says 89, you have good evidence to present to the court.

So It’s That Easy?

Well, not quite.  In order to understand how this powerful evidence works, we have to look up the law.  § 46.2-942 states that “In the trial of any person charged with exceeding any maximum speed limit in the Commonwealth, the court shall receive as evidence a sworn report of the results of a calibration test of the accuracy of the speedometer in the motor vehicle operated by the defendant or the arresting officer at the time of the alleged offense. The report shall be considered by the court or jury in both determining guilt or innocence and in fixing punishment.”

This Gives You Quite An Advantage

First, it says that the court shall receive the certificate into evidence, which gets you halfway there by eliminating any problems with the hearsay rule.  But please note that it must be “sworn”, but that doesn't’t mean the person doing the test has to come to court and be sworn in person, he or she can have a notary public affix a seal on an affidavit to authenticate the document and ease its admission into evidence.  At that point, the law says that the report “shall be considered”, which most judges take to mean that they are simply to do the math and give you the benefit of any discrepancies.

Well, just about.  The law states that “No calibration or testing of such device shall be valid for longer than six months.”  That should give you plenty of time, but in the few cases where it takes over 6 months to get to a final disposition, the certificate must be obtained prior to the deadline.  Some judges use a rule of thumb of only 60 days, so beware that local standards may be more stringent.  Also, keep in mind that your driving record will be entered into evidence.  Prosecutors can also introduce docketing sheets that may show an original charge of speeding that was reduced to defective equipment.  The original summons showing which vehicle you were driving is only a fax away.

Should I Get A Calibration Certificate For A Speeding Charge?

It depends.  As stated above, your driving record may show previous speeding charges reduced to a defective speedometer charge.  Some judges may only be willing to give you one break in a lifetime, others only one break per vehicle, while others might give you one break every five years.  So depending on your record and the judge before whom you appear, the certificate may do no good at all.  Also, any statements you may have made to the officer on the side of the road can and will be used against you.

Your Statements To The Officer May Invalidate The Calibration

One judge would ask people who presented a calibration certificate whether they were relying on their speedometer at the time they were cited.  This is a trick question.  If they said “no”, the judge would reply that the calibration couldn't come into evidence since they were not looking at it anyway.  His rule is that they are irrelevant under these circumstances.  The local troopers picked up on this and started asking people whether they were relying on their speedometers during traffic stops.  Many of them had already ruined the possible benefit of a calibration by telling the officer “I wasn't’t looking at my speedometer,” “I have no idea how fast I was going,” or “I wasn't’t paying attention to my speed.”

Not Every Calibration Is Favorable

Finally, the test may show that the speedometer is actually indicating that you were going even faster than your true speed.  Obviously, it doesn't help to show the judge that your speedometer said 92 when you were only charged with 88.  Of course, for every rule, there is always an exception.  One judge in Virginia will accept any calibration that shows a difference between the true speed and the gauge, whether higher or lower, and amend a speeding charge to defective equipment.  One never knows where that judge may show up on any given day, but otherwise only favorable calibrations should be submitted into evidence.

The Bottom Line: It’s Usually The Smartest Thing You Can Do

In addition to the magic that a calibration certificate can do at trial by getting another number into the judge’s head, it has one huge tactical advantage.  If the test is not favorable, such as one showing the speedometer is 100% accurate, you can always get a second opinion.  Sometimes taking it up to a higher speed will reveal a discrepancy of one mile per hour, and in some cases one mile is all you need.  Compounding that risk minimization effect, if both tests are not favorable, that evidence is ours, we are the only ones who have it, and there is no obligation to share our test results with the prosecutor.  It can’t hurt, it can only help.

If you are facing reckless driving charges in Virginia a skilled traffic attorney could get your charges reduced or dropped. Contact us today by calling 1-866-VAN-WINS or filling out a contact form here.