You Can Be Charged With Reckless ATV Driving

Virginia takes reckless driving very seriously, and there are approximately 15 separate offenses that are considered reckless driving. This is a Class 1 misdemeanor that carries harsh penalties upon conviction and can result in a permanent criminal record. However, you do not have to be driving a commercial truck or motor vehicle to be charged with this crime. These laws can also apply if you are driving an ATV. 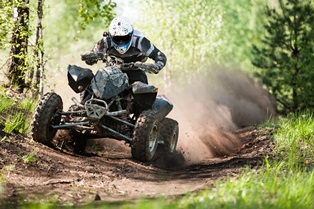 What Is Considered an ATV?

Under Virginia law, an ATV is defined as a motor vehicle with three or more wheels that contains a motor and is manufactured to be driven off-highways. Go-karts and lawnmowers are not considered ATVs. ATVs are only allowed on public highways in limited circumstances that include the following:

When You Can Be Charged With Reckless ATV Driving

When you are driving an ATV, you could be charged with reckless driving for a variety of unsafe driving practices. Driving too fast for weather conditions, failing to yield the right-of-way, and not maintaining control of an ATV are some of the violations that could be the basis of a reckless driving charge.

Many charges when driving an ATV fall under the general reckless driving law. This law provides that no matter what the maximum speed limit is, a person can be charged with reckless driving for driving a vehicle on a highway recklessly or at a speed or in a manner that endangers the life, limb, or property of another person. The police will use this law to charge individuals who are racing or performing a stunt. In some cases, the charges are brought after the person posts his actions on a social media site and is identified by law enforcement.

If convicted of reckless driving while driving an ATV, you could face a jail sentence of up to 12 months, a fine not to exceed $2,500, and a driver’s license suspension. You need an experienced reckless driving attorney to help you avoid these harsh penalties and a permanent criminal record. Call our Petersburg office to schedule a free consultation with attorney Charles V. Hardenberg to learn how he can help you mount a strong defense to the charges you face.