Effective July 1, 2016, any person who smokes in a vehicle—moving or not—with a child under eight years old is subject to a traffic ticket and a $100 fine. The law applies to vehicle occupants with a lit pipe, cigar, cigarette, or other smoking equipment.

Virginia's smoking ban is prosecuted as a secondary offense, which means drivers can't be pulled over exclusively for smoking while there is a child in the car. The driver must first be stopped for speeding, reckless driving, or another similar traffic violation. 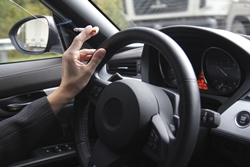 The Reasons Behind This Law

Secondhand smoke is linked to a wide variety of health problems, including bronchitis, pneumonia, SIDS, and cancer. Children, the elderly, and people with lowered immune systems are particularly vulnerable to the dangers of secondhand smoke.

Aside from the health effects associated with exposure to secondhand smoke, critics also state that smoking while driving creates the potential for distracted driving accidents. Additionally, there is concern that cigarette butts thrown from a moving vehicle present a fire hazard.

Comparisons to Other Jurisdictions

Virginia's ban on smoking in cars with children mirrors legislation in several other states. Arkansas was the first to ban smoking in 2006, with adults being forbidden to smoke in a car with a child under the age of six and under 60 pounds in a child safety seat. In 2014, Arkansas amended the legislation to protect children under 14. California, Louisiana, Maine, Oregon, Utah, and Vermont, driven by similar public health concerns, have also restricted vehicle occupants from using tobacco while a child is present.

Possibility of a Federal Ban

Currently, there are no federal proposals to ban smoking in cars with children, although such legislation is possible. The Wendell H. Ford Aviation Investment and Reform Act of 2000 already bans smoking on all flights in the U.S. or between the U.S. and a foreign destination.

If you've been charged with a traffic offense that includes a ticket for smoking in a car with a child, Charles V. Hardenbergh can help. Please call today to schedule a free, no-obligation case review.