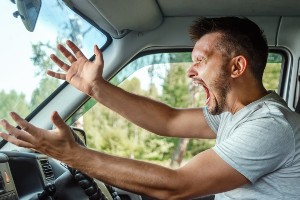 Most of us will experience some form of Road Rage in the course of our lifetime, as either the aggressor or the victim. But what causes road rage, and what steps can be taken to avoid it?

First, Road Rage is an extreme form of Aggressive Driving. According to the NHTSA (National Highway Traffic Safety Administration) Aggressive Driving is a dangerous behavior that can include actions such as speeding, running red lights, and weaving in and out of traffic. Unfortunately, sometimes these behaviors turn angry, or even violent. These encounters can result in serious injury or even death.

There are many factors that contribute to the onset of Road Rage. NHTSA says that traffic congestion and delays are the most prevalent. Yes, it is a situation that frustrates everyone, but for some, it becomes intolerable, leading to aggressive driving. But it doesn’t stop there. In a survey, NHTSA found that 33% of drivers reported feeling impatient at stoplights, 25% in parking lots while waiting on passengers to enter a vehicle and 22% when highway lanes narrow.

It is important to remember that life is busy! Between work, school, gymnastic practice, doctor’s appointments or assisting elderly parents, life can be overwhelming, and we find ourselves running late, which can contribute to Aggressive Driving. These numbers can be seen in Washington DC. During a 28-day period more than 60,000 citations were written for such actions such as passing on the right or following too closely. According to NHTSA the most frequent excuse for the behavior was “I’m late.”

There are ways to protect yourself and your family. When leaving for an appointment, try giving yourself a little extra time. WebMD also suggests being courteous and to follow all traffic laws. Remember to use turn signals, but don’t use rude gestures. Tuck that middle finger away for other occasions. Another tip is to put distance between yourself and the other driver. Also, control your own anger and try to be empathetic. The other person could be having a bad day as well.

The most important thing to remember is that is that you cannot control what another person does, but you can control your own actions. At the end of the day, getting home safely to your family is more important than going head to head with a driver who cut you off.

If you would like more information on the statics of Road Rage, please see the following links.