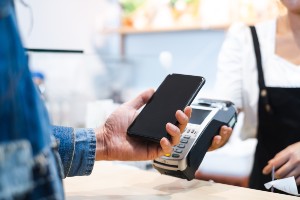 The idea of a cashless society is not a new one, and in some form or another, has been tossed around for decades. With the onslaught of COVID-19, concerns have been raised on whether handling cash can spread the virus. This has once more ramped up the discussion of America becoming a cashless society.

But what exactly would a cashless society mean? Would it entail a limited amount of cash for tipping your food server, or maybe slipping a few bills into a birthday card for your niece or nephew? Or would the economy become completely digital, with no cash whatsoever?

Essentially a cashless society means exactly that. No cash. Nothing. Zilch. Nada.

There are several pros and cons for becoming a cashless society. First the pros. A cashless society is convenient. Pull out your smartphone or debit card and within a few seconds the transaction is finalized. There’s no fumbling for the correct bills or waiting on the cashier to count back your change.

A cashless society also means there is no cash in your wallet, which in turn can reduce your chance of becoming the victim of a robbery. The Balance, an online banking magazine, says a recent study found crime dropped 9.8% in Missouri, once the state switched from cash welfare benefits to electronic benefits. That’s a significant drop in crime.

There are also several cons associated with a cashless society, including loss of privacy. Every cent you spend will be tracked by the government. HuffPost warns that financial surveillance, in countries like China, could potentially “censor and restrict the freedoms of people who express dissenting opinions against the state...” This is something that should raise concern in the heart of every American. If Socialism or Communism takes stronger hold on American society, what would stop the government from doing the same thing here?

Another con of a cashless society is the fact that technology is not perfect. Catastrophes, computer glitches or even human error can leave you without the ability to purchase necessities. The Balance points out that these same events make it impossible for merchants to accept payments as well.

Not everyone has access to banking, debit/credit cards or smartphones. The FDIC states “approximately 8.4 million U.S. households, made up of 14.1 million adults and 6.4 million children, were unbanked in 2017” while another “24.2 million U.S. households, composed of 48.9 million adults and 15.4 million children, were underbanked”. What would happen to these individuals in a cashless society? Without the ability to open a checking account, it would become very difficult, if not impossible, for these individuals to purchase necessities.