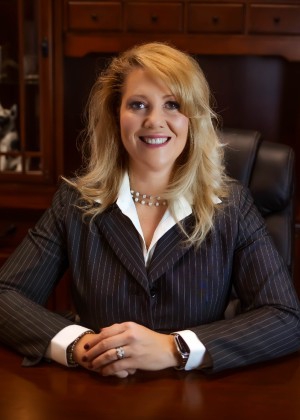 Sandra Drewniak Nicks became a well-respected and passionate Litigation Attorney after working for years as a state prosecutor, military prosecutor, federal prosecutor, and private defense attorney. She has a consistent history, filled with countless victories defending and prosecuting a wide variety of criminal and civil matters.

Sandra decided to become an attorney at the tender age of five. One afternoon, as she returned home from kindergarten, a man and woman came running from her house, carrying her family’s possessions. She remembers the feelings of terror and violation as she realized her family had been robbed. She also remembers that her mother was fearless, chasing the intruders and threatening to “kick their tails.” This incident shaped Sandra into the woman she has become and impacted her decision to become an attorney. Her drive is to ensure other people never feel the way she felt on that fateful day. She just wishes her mother was still here to see how far she’s come.

Sandra Drewniak Nicks joined the military in 1999. For the past 22 years, she has served with courage and honor in the United States Air Force, the Air National Guard, and the Air Force Reserves. She is a Lt Colonel and recently returned to the Air Force Reserves and civilian life after completing a five-year tour on active duty defending wounded warriors with their legal disability cases, winning favorable results in most instances.

Sandra isn’t “all work and no play.” She loves to ride horses and attend rodeos. This love led her to the Bexar County Palomino Patrol and Drill Team in the San Antonio Stock Show and Rodeo. Sandra is passionate about this organization because it supports our military and police. She began riding with this group while serving in the United States Air Force. She rode her horse Trigger on her antique Ted Flower’s silver saddle while carrying the American Flag. She did this every night for the rodeo grand entry. She also rode in parades and in Back-the-Blue color guard events. When not on the back of one of her horses, Sandra is involved with the Air Force Wounded Warrior Organization and helps wounded, ill, and injured military members. Other things Sandra enjoys are shopping with her girls, playing with her three dogs, baking, and reading.

Sandra has two daughters, Savannah, 17, and Charlotte, 12, who are her world. Sandra’s deep love and commitment to her family is the reason she lives and the motivation for fighting so fervently for her clients.